Something a little different, this helmet  appealed to me because of the history of the Squadron and the pilot who wore it.
The helmet itself is an early 1950's designed British MkI-A flying helmet, it has a "G" Type inner flying helmet and an "H" Type oxygen mask. Designed to be used in all frontline aircraft including supersonic jets, it replaced the MkI which did not have the fixed visor attachment.
The cloth inner is a size "3" and dated 1960, the helmet itself is also a size "3"  and dated 1962, the oxygen mask is dated 4/65. The insignia to both sides is that of 75 Sqn.

75 Sqn was the fighter/fighter bomber wing of the RNZAF, located at Ohakea AFB  near Palmerston North. In the post war years  operated de Havilland Vampires from 1951 through to 1970.
From May 1958  the Squadron operated RAF loaned English Electric Canberra B (1) 12's  out of Singapore, they were used on anti-terrorist operations during the Malayan Emergency, they were returned in 1962.
1966 - 1970 English Electric Canberra's, this time being based in New Zealand at Ohakea AFB.
McDonnell Douglas A-4K and TA-4K Skyhawks began operating in 1970 through to when the squadron was disbanded on 13 December 2001.

This helmet was issued to Richard (Dick) Francis Lawry (774793), recipient of the Air Force Cross.

-Dick Lawry was born on the 18th June 1935. He joined the RNZAF in 1953 at the age of 18. He learned to fly on Tiger Moth's at Tairie AFB near Dunedin in the South Island, he soon moved to Wigram AFB  in Christchurch and continued his training on North American Harvard's before graduating to 14 Sqn.
-Flying Officer "Dick" Lawry, flew De Havilland Venom's with 14 Sqn, on loan from the RAF, in the mid 1950's which were based in Tengah Singapore.
- On 17th March 1958 at 41,000 ft he suffered a canopy loss on his Venom aircraft serial number WE387 over Singapore, Dick recalls "I heard an explosion, I was temporally blinded due to the dust that got sucked up underneath my helmet visor from the cockpit, I remember looking to the side and seeing the jagged edges of what was left of the canopy" The aircraft was landed without incident.
-October 1959, now a Flight Lieutenant, he was part of the delivery crew for the RNZAF's first English Electric  Canberra B (1) 12's to Tengah, Singapore,  (See photos below). He flew these during the Malayan Emergency with 75 Sqn until 1961.
-In 1966  he was CO with 75 Sqns Canberra B (1) 12's,  these arrived at Ohakea AFB in 1966 and served until 1970. (See photos below)
-January 1969, whilst at Staff College in Auckland, Sqn Ldr Lawry was summoned to Government House  where he was awarded the Air Force Cross.
-Sqn Ldr Lawry served in Vietnam as a Forward Air Controller with the US Air Force, attached to 2nd Brigade, 101st Airborne Division, Ph Bai (North of Da Nang), Flying Cessna 0-2's until 1970.
-Sqn Ldr Lawry did an exchange tour with the US Navy flying Vought F4U Corsair's, and was the only RNZAF pilot to qualify for deck landings in the jet era, the Deck Landing Qualification's were to be completed at night and had to be repeated on a six month cycle, his first qualification was completed on the USS Lexington in January 1972.
-Sqn Ldr Lawry was CO of 14 Sqn from January 1974 to January 1975.
-Wing Commander  Lawry was CO of 75 Sqn from February 1975 to February 1977.
-He retired at the end 1977.

June 7th 2011.
On Tuesday June 7th 2011 I had the privilege of meeting Dick (see photo below) and his lovely wife Pat,  over a couple of hours Dick shared stories and experiences with me of his 25 years  service in the RNZAF. It was a pleasure talking to a former pilot who has certainly had a distinguished flying career and I feel honoured to own a piece of his history.

This helmet, Dick explained, he wore flying on Canberra and Vampire aircraft in the mid 1960's. 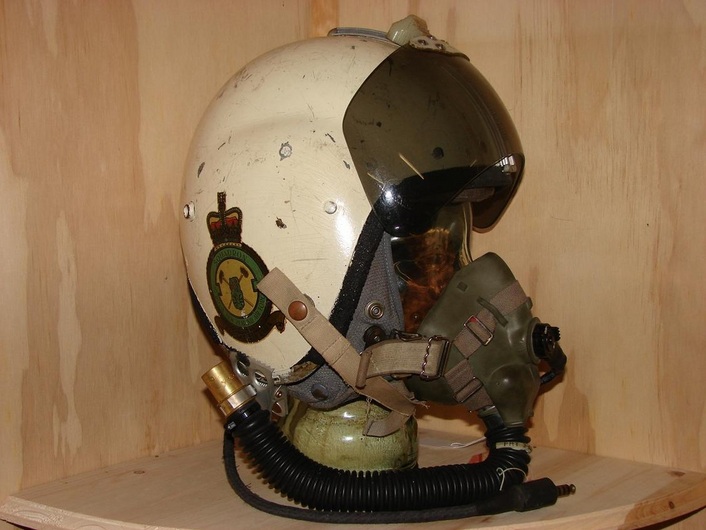 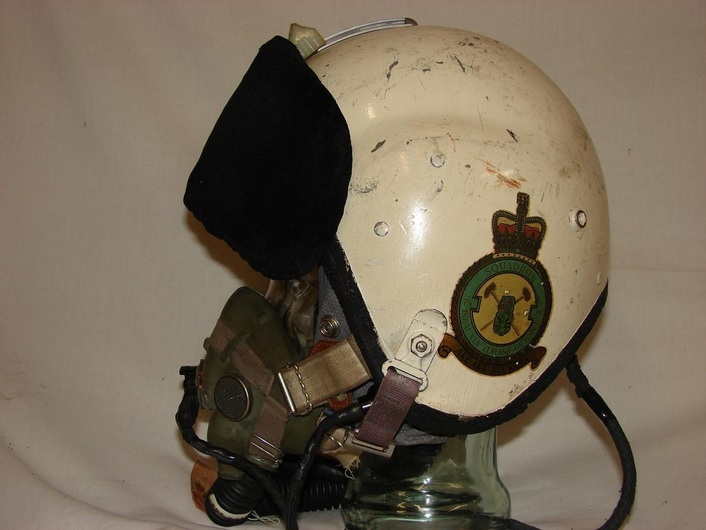 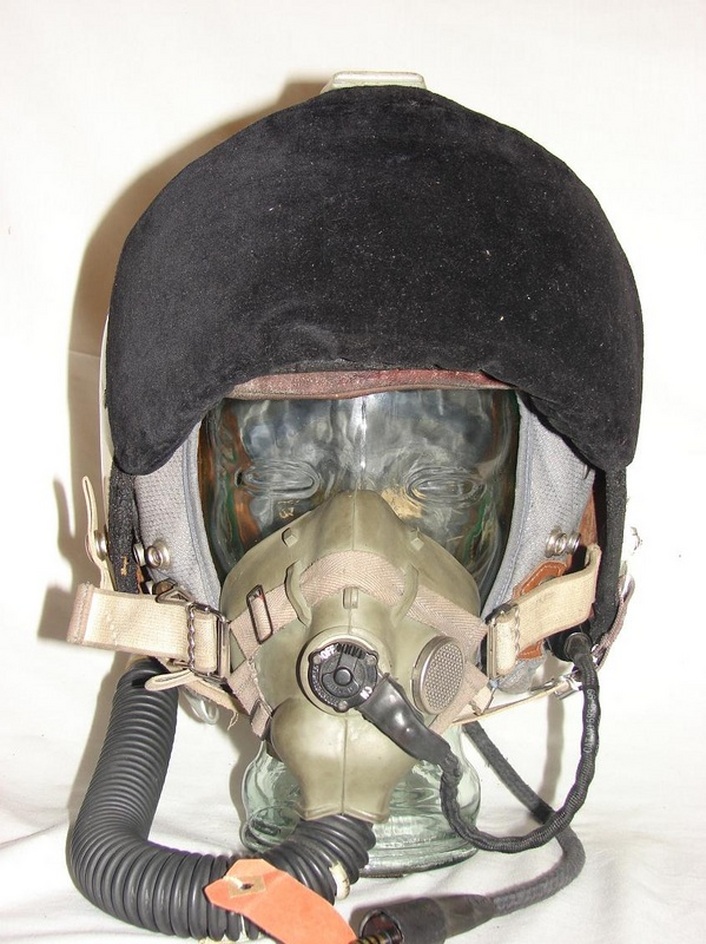 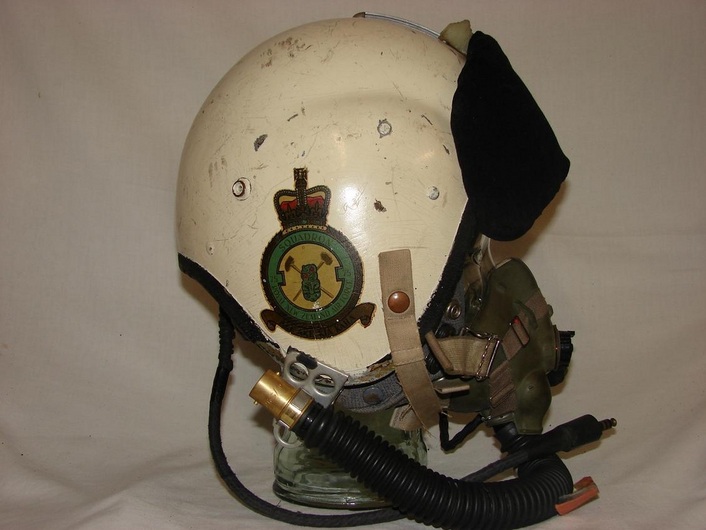 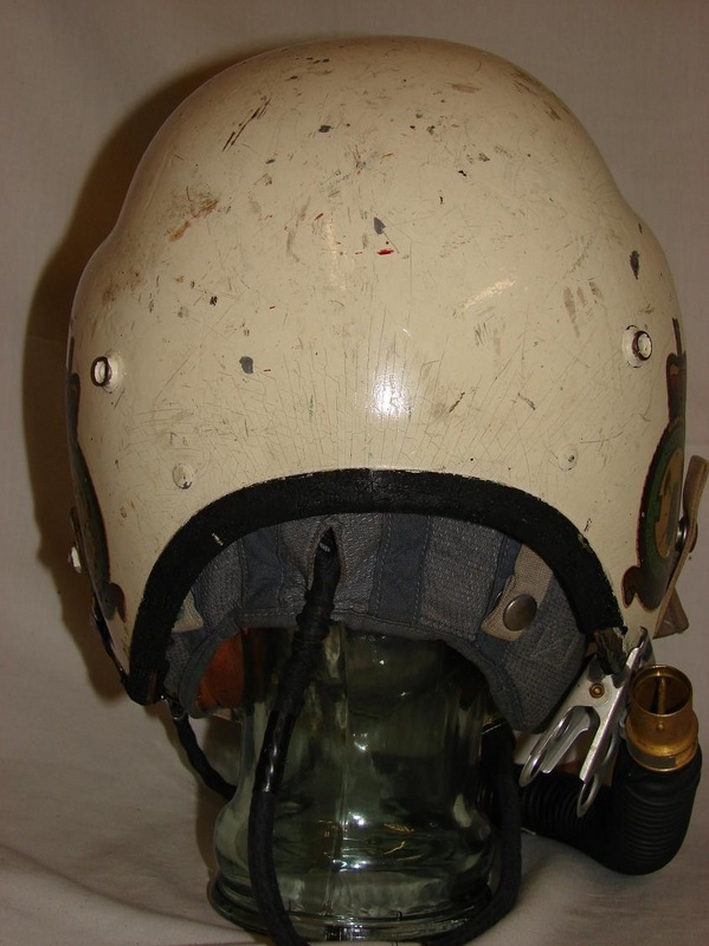 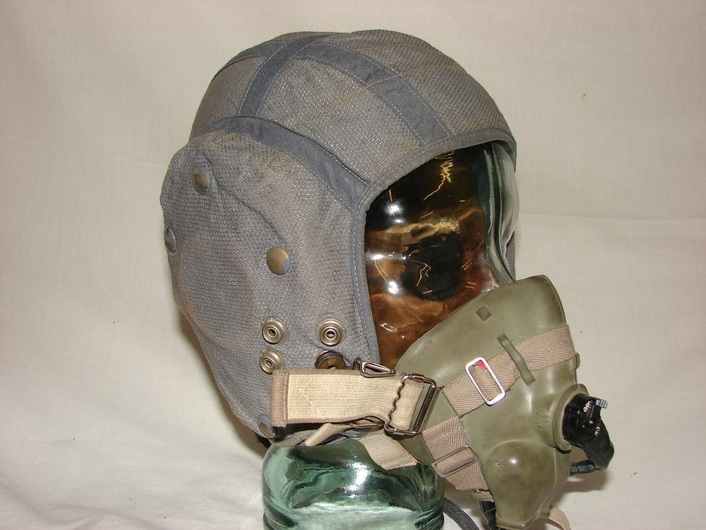 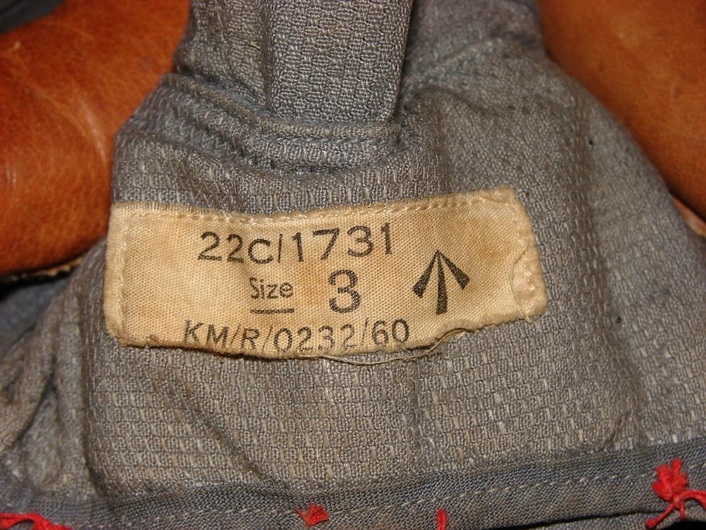 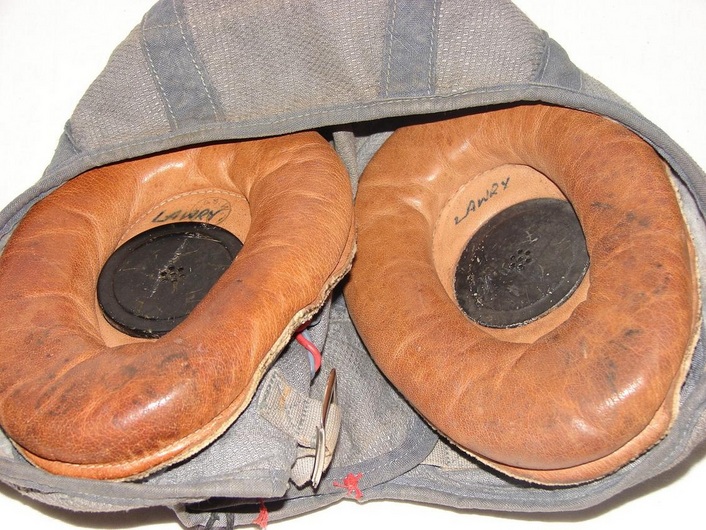 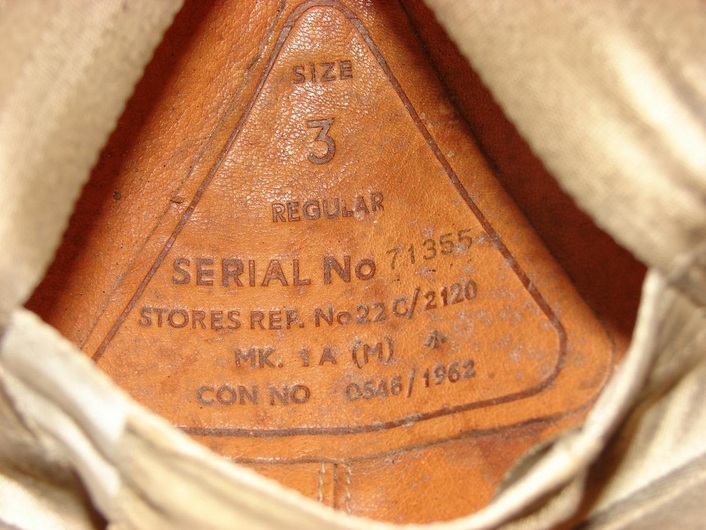 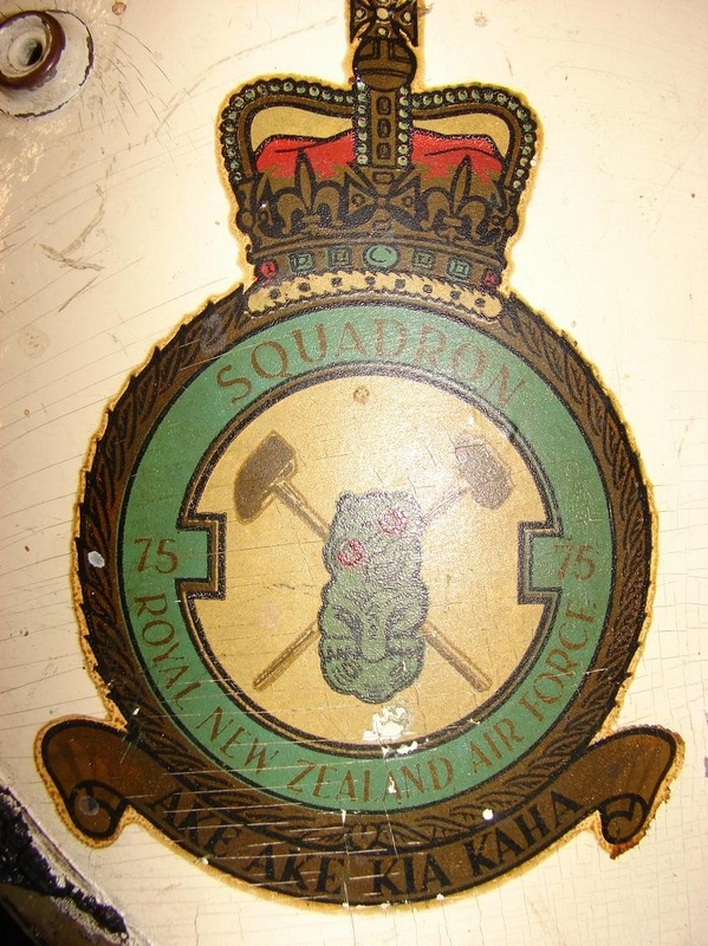 ​Above: 75 Sqn insignia: Dating from March 1944, "Ake Ake Kia Kaha" Maori - "For ever and ever be strong". The figure to the centre is a Maori Tiki (human figure generally made of Greenstone), in front of two crossed hammers. The
75 Squadron's insignia reflects it's Royal Air Force origins when in 1940 the  "New Zealand Flight" became 75 (New Zealand) Sqn. October 1946, the RAF transfers 75 Sqn name and badge to the RNZAF. The Sqn was disbanded in 2001. 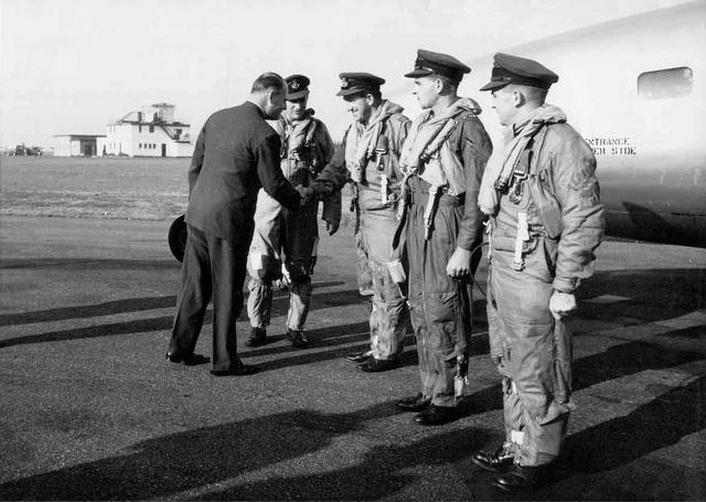 Above: New Zealand's High Commissioner to the UK meets (L to R) Harold Moss, Alex Campbell, Dick Lawry and Murray Peacock at RAF Upwood on 16th October 1959 prior to the delivery flights of the RNZAF's first B(1)12's 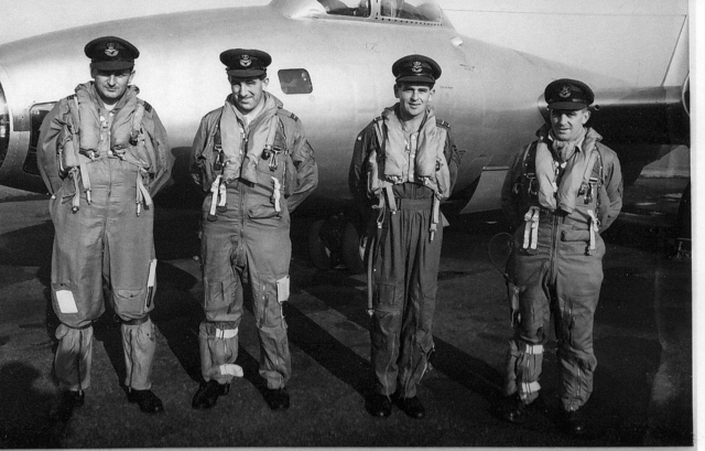 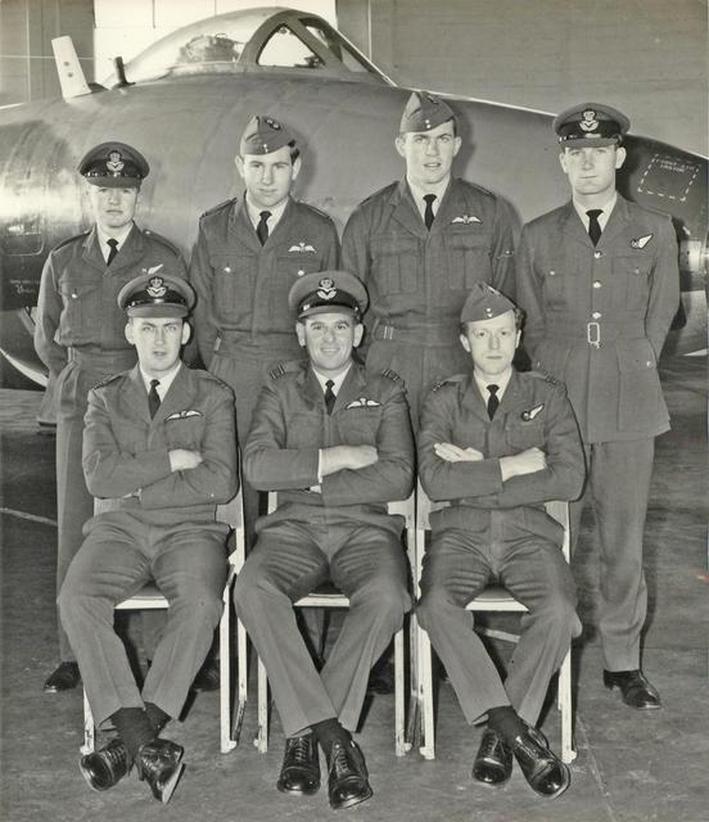 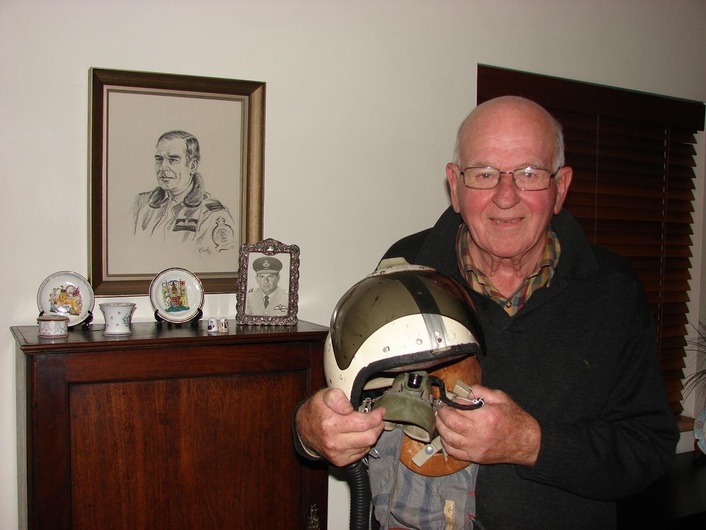 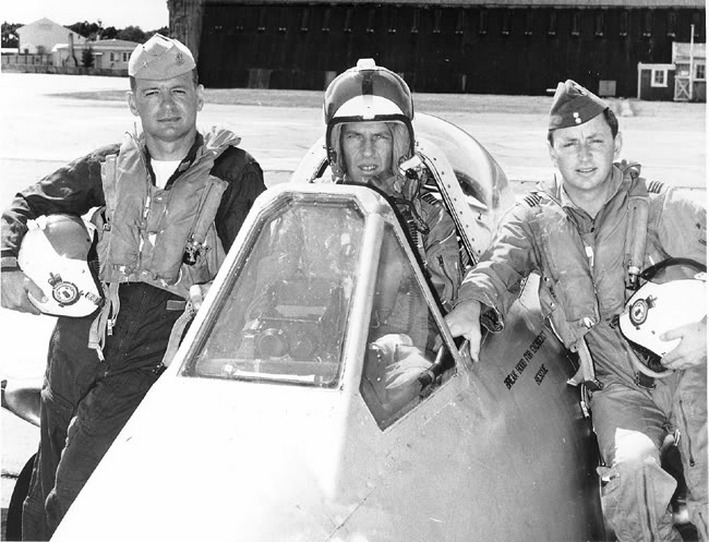 ​Above: The last ever RNZAF Vampire display team,  from Left to Right: Lt Cdr Fred Myers USMC (exchange pilot), Sqn Ldr Stewart Boys (CO 75 Sqn) and Flt Lt John Denton, this photo was taken in February 1970. They have MkI-A flight helmets with the insignia of 75 Sqn to the sides